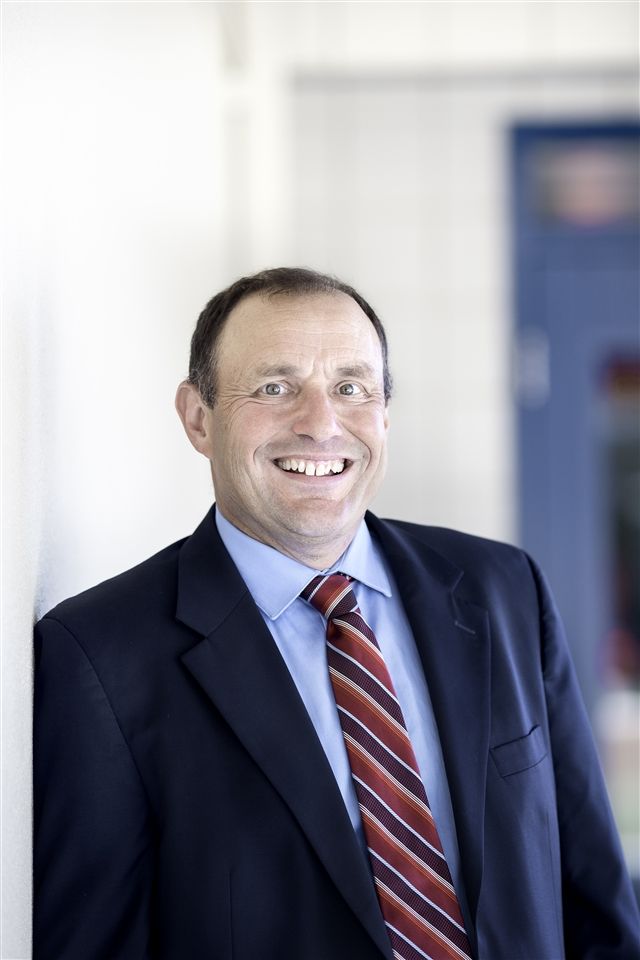 After 33 years of astounding dedication to St. Mary's School, Frank Phillips will assume the role of President Emeritus on July 1, 2022.


Frank's dedication to St. Mary's School is rivaled only by our founding Sisters. Starting as a part-time librarian in 1989, Frank took his love for words and his passion for education into the Latin and English classrooms. Frank served as a teacher for many years before moving to administration, taking on the role of Head of School in 2005, and later becoming President.


Under his unwavering guidance, St. Mary's School enjoyed an explosion of growth from a small, stagnant enrollment of 326 to a thriving campus of more than 500 students. Frank's vision led to the purchase of the land St. Mary's School now sits on, an act that had to be approved by the Vatican. This foresight gave the school the freedom to grow. During his tenure, the school added a 5th grade and expanded the footprint by 85,000 feet with the Carrico Center, Naumes Center for Fine Arts & Athletics, St. Mary's Chapel, and the dormitory. As President, Frank's vision established the first Confucius Classroom in North America, took St. Mary's from its Medford campus to the international school it is now and introduced a revolutionary modular schedule with St. Mary's 2.0.

On the rare moments when Frank wasn't in the classroom, he could be found traveling the world with his wife Bev and many friends, namely Al and Ann Hunter. His love for the natural world manifested in a 50-acre hobby farm in the Rogue Valley, where Frank spent early mornings and late evenings feeding livestock and helping bring lambs into the world.

The Role of President Emeritus
While many corporations, schools, and universities offer symbolic titles of President Emeritus at St. Mary's, the title comes with an essential job for Mr. Phillips. By stepping away from the classroom and the leadership of the school, Phillips can spend time working on important projects including the school's Endowment Campaign and managing the profitable network of St. Mary's campuses that we have operating around the world.
"St. Mary's owes a huge gift of thanks to Frank for his leadership these past seventeen years.  Frank changed the fortunes of our school and everyone who is part of our community is better off because of him.  His wisdom, sense of humor, positivity, friendship, and intelligence made it fun for me to come to work each day.  Frank challenged me and made me a better person and I will always be grateful for him."

-Jim Meyer, St. Mary's Principal
"Frank was always guided by one resolute principle: St. Mary's and its students come first. With that as his North Star, he made countless decisions, always in the best interest of the school. Frank, gratiās tibi agimus."

-J. Adam Peterson, Chair, St. Mary's Board of Trustees
"I was in the first class Frank ever taught at St. Mary's. As a teacher, he had a profound impact on the way I view the world. I served on the St. Mary's Board for nine years. During that time I witnessed firsthand what it means to be a visionary leader, and how to turn mission into action. Over the past thirty-three years, Frank's friendship has shown me the importance of humor and service, and how to be a truly kind and compassionate person. We have all been blessed to have Frank's brilliant leadership guiding St. Mary's, may he continue to inspire us moving forward."

- Eric Guyer '91, Alumni parent and former Chair of Board of Trustees
"In the nearly thirty years since we both joined the faculty of St. Mary’s School, there have been many changes, but one thing has remained constant: our unvarying appreciation of Frank Phillips, first as a brilliant colleague and later as a leader of rare gifts, energy, and vision. He has also been a warm, unwavering friend and a traveling companion of unparalleled erudition.


When Frank became principal of St. Mary’s, the school had been experiencing a tough time. Within weeks of his appointment, faculty morale jumped, and it was clear that exciting changes and innovations were afoot. During Frank’s tenure, the school has purchased the land upon which our buildings sit, expanding our ability to raise funds and direct our own destiny; three separate building programs have been completed, vastly improving the school’s infrastructure and allowing it to attract, retain, and board new students from around the world; and the school’s excellent, but conventional, prep school curriculum has been replaced by a genuinely innovative curriculum that maintains very high academic standards while placing student choice at its heart. Enrollment has blossomed. And these are just the most obvious things--behind the scenes, innumerable improvements and innovations have been implemented.


While leading from the front for all of these fundamental changes, Frank found time--as well as being a deep thinker, he also has superhuman energy-- to develop and deliver new classes, to teach himself Italian and some Mandarin, to remain an approachable colleague, and to lead popular school trips to Italy with the late Patrick Naumes and ourselves. Frank’s withdrawal from his central leadership role will leave a lacuna that will be difficult to fill at both collegial and administrative levels. The school he leaves is unrecognizable compared to one he inherited: it is in an infinitely better position. And he is leaving his command in safe hands.


Frank’s tenure as the principal and president of St. Mary’s School has been an object lesson in how inspired leadership can turn a business around and nurture a new commitment to excellence and success in a community lacking a sense of purpose. Only through Frank’s vision, unceasing energy, and unparalleled dedication could all this have been achieved. His frank openness and honesty have made him a leader and friend of true value. He will be missed by all, but his legacy, like that of one of his great heroes, JRR Tolkien, will endure."